This is one reason why at my office we protect your privacy by not giving any information to anyone saying he is with CRA, without him or her sending verification of their identity by fax: 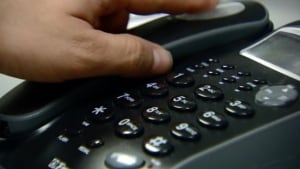 Scam artists impersonating Canada Revenue agents are trying to get money out of Canadians by convincing them they owe tax money. (CBC)

RCMP in southeast New Brunswick are warning people about a telephone scam where someone claiming to be from the Canada Revenue Agency calls and demands money by claiming the person owes the government overdue taxes.

The callers are aggressive and often threaten to come to the person’s home and arrest them if the money is not paid, said the RCMP.

The callers speak with a foreign accent and insist the money be paid immediately by credit card or through Western Union, states a police news release.

“We’ve received several complaints from residents about this particular scam over the last week,” said Cst. Carmin Lamoureux of the southeast district RCMP.

“Some of the fraudsters are making themselves look legitimate because they are running a program that shows the CRA phone number on the victim’s call display. It is important for people to know that this is just another type of telephone scam and that they are not calling from CRA.”

Anyone who receives such a call is asked to report it to their local police and the Canadian Anti-Fraud Centre.